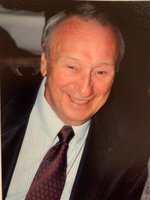 Joel joined his father in business in 1968.  He dedicated his life to building Ross Electric Company from a single truck to one of the largest electrical contracting businesses in the area.  He took pride in working side by side with his three sons teaching them the trade.  Joel truly valued his many customers and dedicated employees.

Joel was an avid golfer and played in several leagues, both in Sullivan County and in Florida with his wife Joan.  He played in the Businessmen's Golf League at the Concord and Grossinger’s Golf League locally, and in the Men’s League and the Mr. and Mrs. League in Aberdeen, Boynton Beach, Florida.  Joel was an active member of the community, playing in the Liberty Men's Softball League, he was a past Rotary member, board member of the Sullivan County Golf and Country Club, a 50 year member of the International Association of Electrical Inspectors, a board member of Congregation Ahavath Israel and also a boys basketball coach there.   He enjoyed fishing, hunting, snowmobiling and bowling, along with traveling the world and spending time with friends and family.

Joel was predeceased by his parents Harry and Rose Ross and his son Steven Michael Ross.

A funeral service will take place on Thursday, June 17, 2021 at 11:00 am at the Joseph N. Garlick Funeral Home, 388 Broadway, Monticello, N.Y. 12701.  Burial will immediately follow in the family plot at the Ahavath Israel Synagogue Cemetery, Hysana Road, Liberty, N.Y.