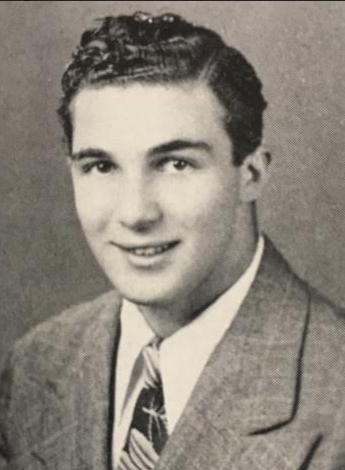 Jack Levin, life-long resident of Sullivan County passed away to join his wife Erma on Wednesday, June 27, 2019.  He was 92 years young.

Jack Levin was born in Northern Philadelphia on August 23, 1927, to parents, Elizabeth, and Joseph Levin.

He was a handsome, 6'2 inch, smart, athlete, with a quick wit and a tough guy exterior.  In his high school years, he was an accomplished athlete, running track and playing football, receiving a scholarship to play for Villanova College.

He also became a boxer in college going by the name of Kcaj Nivel (Jack Levin spelled backwards) because he wasn't allowed to accept money for that sport due to his football scholarship.

Jack made his way to Florida after college where met and fell in love with his girlfriend who later became his wife, Erma Silvi.

They made their way "home" to the Catskills to work at the legendary Grossinger's Hotel and were married in 1950.  They were the proud parents of four children.

Playing by his own rules his whole life, Jack served as Maitre'D of the dining room and night clubs at many of the famous Borsht Belt hotels including the Raleigh, Kutsher's, The Stevensville, Brown's and was The Special Events Coordinator at the iconic Concord Hotel before he retired.

His contribution in what was known as "the Mountains" is a permanent part of the DNA of what was the legendary Borsht Belt.

He had a lifelong friendship with the late rock and roll emprasario, Bill Graham when they met in the early 50's as waiters.  Bill memorialized Jack in his book "Bill Graham Presents: My Life Inside Rock and Out' saying that Jack would work all day, go out with the boys and right back to work, preferring to stay up because he hated being woken up!  Bill at one point wanted Jack to work for him as his head of security. He was also roommates with Eddie Fisher at Grossingers and was an important liaison for many of the visiting stars of the '50s, '60s and 70's who played at the area hotels.

Along with his athletic prowess and intelligence, Jack possessed an incredible sense of humor and a unique ability to tell a great story. He loved all dogs and welcomed them into his home. He adored and was fiercely and passionately protective of his kids and later his Grandchildren who are all heartbroken at his loss.

Sons, Vance Levin (Alexis), Jerry Levin (Frances) and daughter Resa Levin Wallach (Jon) along with his five grandchildren, Nicholas, Tyler, Kyle, Bryce and Zach along with many nieces, nephews and his siblings, Alan Levin, Elaine Feller, Phylliss Rapoport and Pauline Eline are grateful for the many years they had with him and will treasure their memories of their father grandfather and brother and Uncle.

Jack had a reputation as a tough boss. He is a member of the Greatest Generation known for their love of country, their deeply ingrained work ethic and devotion to family.  Jack was all that and more.

Jack is predeceased by his loving wife, Erma Levin who he was married to for 62 years at the time of her passing, sister Annette Levin, son Howard Ben Levin, his yellow lab, Katy 2 and his parents

The family will gather at the home of Resa and Jon Wallach on Monday, July 1, 2019, from 1pm to 6pm.  Please contact Garlick Funeral Home for address and directions.

The family requests that in lieu of flowers, donations can be made to any of the following foundations, The Trevor Loughlin Foundation, The Allyson Whitney Foundation and The Anthony Foundation for Autism Support.

Rest in Peace Dad and Grandpa, You are forever in our hearts and will continue to inspire all of us.

To plant a tree in memory of Jack Levin, please visit Tribute Store
Share Your Memory of
Jack
Upload Your Memory View All Memories
Be the first to upload a memory!
Share A Memory
Plant a Tree