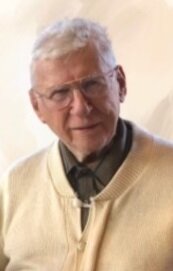 Seymour Frogel of Liberty, NY, formerly of both Forest Hills and the Bronx, NY, passed away on Wednesday evening, August 24, 2022, at the Care Center at Sunset Lake Rehab, Liberty, NY, due to a multitude of chronic health issues. He was 98 years old, almost two years short of his goal to live to be 100 years old so that he could be featured on the Smucker’s jar on morning television.

Survivors include his devoted daughter, Karen Kaner of Parksville, NY, his grandson, Austin Schneider-Kaner and Austin’s partner, Kelsie Nolan. He is also survived by his brother and sister-in-law, Carl and Dorothy Frogel of Yorktown Heights, NY, his brother-in-law and sister-in-law, Harold and Carol  Herzlich of Las Vegas, NV, Austin’s father, Elliott Schneider of Parksville, NY, Nancy Bobik, his devoted caregiver during some of his final years and many nephews, nieces and dedicated lifelong family friends, especially Gabriel and Rita Grumer of Dover, DE and Jerusalem, Israel and Bernard and Heidi Kaner of New York City.

Seymour grew up in the Bronx and as the oldest son, he took on the responsibility of supporting his mother and siblings. He proudly served in the United States Army and then, returned to this country where he graduated from New York University which he was able to attend under the GI Bill. He worked in Manhattan as a salesman, primarily for his own furniture business. He retired when he relocated to the Catskills in 2010, so that he could reside nearer to his daughter and grandson. Seymour was a loyal and protective husband, a caring and concerned father and a funny and easygoing Papa. Until his difficulties with macular degeneration exacerbated, Seymour enjoyed reading historical figure biographies and detailed war-related books and spending countless hours trying to complete The Sunday New York Times crossword puzzle.

In addition to his parents, Seymour was pre-deceased by his loving wife of 70 years, Sidelle Frogel, his son, Alan David Frogel, and his sisters and brothers-in-law, Ruth and Norman Artig and Jean “Luba” and Harry Dardick.

Memorial contributions in Seymour’s name may be made to the Liberty Public Library, 189 Main Street, Liberty, New York 12701.