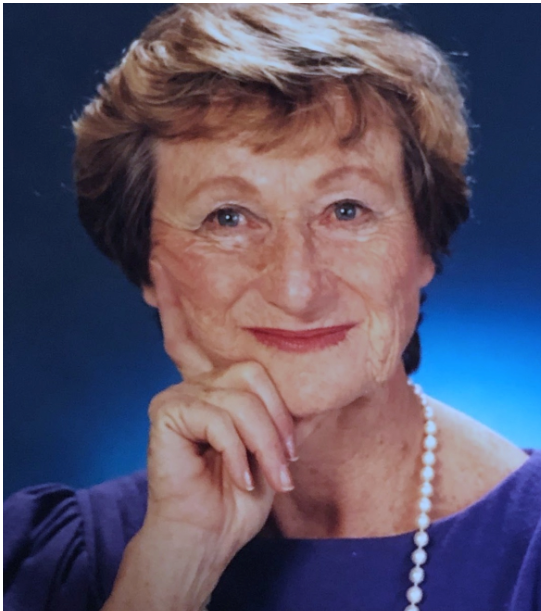 Obituary of Anita B. Garlick

It is with such sorrow that we announce the death of Anita B. Garlick in Brookline, Massachusetts. She died at the age of 96 on March 13, 2020. She was the daughter of immigrants, a very proud first-generation American, a college-educated child of the Great Depression, and a beloved and loving wife, mother, grandmother, and great-grandmother. Anita was born in Brooklyn, New York in 1924 to Bella and Joseph Berkoff, immigrants from Russia. At the age of 15 she experienced the tragedy of her father’s untimely death, but was nurtured and supported by her mother, grandparents, and her Uncles Sam and Dave and Aunts Anna, Lil, and Etta.

In 1942, she graduated from Tilden High School, having made her mark as editor in chief of the yearbook. She wrote beautifully even then, and she spent the rest of her life with either a pen in her hand or at the keyboard on her desk. At the age of 96 she was still writing her story. In 1944, she married Joseph Garlick. She completed her college education (but not her lifelong learning) with a Bachelor of Arts from Brooklyn College. In 1948, Joe and Anita moved to Monticello, New York and opened the Joseph N. Garlick Funeral Home. She became a nursery-school teacher and together with Joe raised three sons, Saul, Jonathan, and David, in the apartment above the funeral home. When Joe was elected Mayor of Monticello in 1967, she was an enthusiastic activist in civic and community affairs, and her positive contribution is not only remembered, but still felt today. After a brief sojourn in New York City, Anita returned to Monticello after the sudden death of Joe in 1978 and remained there for another twenty years. She was supported by a close network of friends who helped her to manage the funeral home until she moved to the Boston area to be near her children and grandchildren in the late 1990s. Once in Boston, Anita established new friendships and enthusiastically continued her studies and volunteer work. She enriched the lives of her sons and her cherished grandchildren with her joyful exuberance for life, introducing them to and sharing with them her love of theater, music, and the arts. Bar and bat mitzvahs were generously celebrated by traveling, and Anita’s grandchildren will remember her energetic love of life, her endless curiosity, and her boundless love and encouragement. We will all remember Anita’s beautiful smile and heartfelt laughter, her irrepressible optimism, her love of comedy, and her own comedic flair.

She is survived by her three sons, Saul, Jonathan, and David, and their spouses, Lynn, Lauren, and Adele; her grandchildren, Keren, Yossi, Shayna, Joshua, Matan, Jesse, Kayla, and Chera; and her great-grandchildren, Julian, Emma, Hazel, and Ruby. She is also survived by a niece, Linda; her many cousins from her mother’s side of the family; and, despite the distant miles, close family in Israel from her father’s side of the family. Today we also remember Sarah, Moishe, and Yonah.

Funeral arrangements were made by the Joseph N. Garlick Funeral Home of Monticello. Having Anita’s funeral service in the chapel built by her late husband embodies the tenet “A Tradition of Service to the Living” that guided their business. She will be laid to eternal rest in the Garlick family plot in Ridgewood, New York, next to Joe.

In light of the current public health crisis, the funeral and shiva will be private; a memorial service will be announced at a later time.

Anita loved reading and speaking Yiddish, and she was determined to preserve the language of her grandparents and theirs. She was generous in her support of the Yiddish Book Center in Amherst, Massachusetts; donations in memory of Anita should be made here.

Funeral arrangements are honorably entrusted to the staff of the legacy Anita helped to create, the Joseph N. Garlick Funeral Home, Monticello, NY ; 845-794 -7474 or www.josephngarlickfuneralhome.com.

To plant a beautiful memorial tree in memory of Anita Garlick, please visit our Tree Store